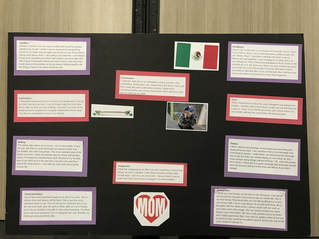 This project for me was hard at first. It was hard coming up with the initial idea but it was then easy to elaborate on it after I came up with it. It also a little bit harder to write and share some of  the answers to some of the questions because some of the answers were a little bit deeper. Finding pictures was also a little bit hard. Which is why I only have a couple different pictures.
The easiest part of this project was printing the text ,cutting it out ,and gluing it onto the poster board. Finding these pictures was also pretty easy.
Presenting my Look at me now was good. I felt comfortable but just a tiny bit uncomfortable like any other time that you would present something. it would make me a little bit uncomfortable because the answers sometimes involve such personal topics.
I received critique from one of my classmates. before I printed the final draft. It was helpful because she explained where I could make it better and where I could add a bit more of information to make some of the story's flow better.
When we presented our Look @ me now's to the class we had to critique somebody's. I critiqued one of my classmates. His was on a pizza box and it was very cool to see all the things he did. The best part about it to me was the pictures he had because they were all drawings he drew. And he is a very talented drawer. It was very well made. All his information was good.
I believe I used all the time in class wisely. I think  it took me a little bit longer because of the fact that it takes me a little bit longer to get all my ideas down on paper. If I could have gotten down my ideas faster I believe I could have my Look @ Me Now detailed with more pictures.
I believe I deserve an A because I really tried hard to answer all these questions with will thought out responses and tried to make it look as good as possible with the time that I had. But I do agree it could look better.
If there was one thing I could change about the project it would be to change around some of the questions and create new ones.