​It all began with the game of pig. It was the start to the ¨Probability project". It really helped me understand the basics of probability while still being very interesting and fun. Basically you both start with zero points and take turns to throw the dice as many times as you like adding the total at each throw to your score. Throwing one 6 ends the turn and nothing is added to the score for that turn. Throwing a double 6 ends the turn and the total score goes back to zero. This was a game of chance because each throw was its own. The winner is the first player to get 100 or more points

The game I decided to  showcase was Basetta. There was many games played but I found the most information about this one which helped me get a good idead  on how to play it.  We do not know who invented it but we do know it originated in ​Italy.  The game was played by higher class people due to the fact that you could win and lose very big. This game was usually played at gaming dens where people would come together. Although there is no direct game like this today. Although there could be a game that took aspects from Basetta. Chance and probability come into play when the dealer is pulling cards from his deck and the player wants him to pull his card. This is where the chance came into play for our game.
​ 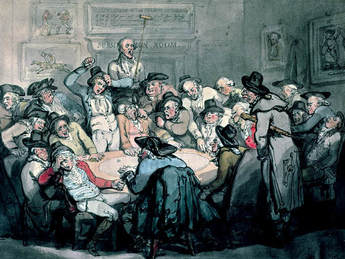 The Question we addressed for our Probability was the possibility of getting a winning streak. The two pictures here show our Tree diagram on the right. On the left it shows more of our calculations to show the probability. Our good understanding of how the game worked really helped on finding out the probabilities of getting a winning streak for our game. This probability decreased or increased depending on how many times the target card had been drawn.
Some Habits Of A Mathematician that I found that helped me a lot throughout this project was starting small and being systematic. A lot of these problems were sometimes hard for me to understand. Starting small and taking my time throughout these problems really helped me to be able to understand them a lot more. Being systematic was also helpful. Taking certain aspects of the problems that I found challenging and then writing specific notes on these parts really helped me understand how to encounter them the next time I saw them.
​
For me this project overall was interesting, fun, and challenging all at the same time. We first started out with smaller activities but as we progressed everything got a little bit harder. Sometimes it would take me a while to understand a complex problem. Something I found that worked really well for me just stepping back reading the problem a couple of times so I really understood what it was asking. Then taking each part of the problem one step at a  time. Since probability was relatively new to me it  took me to understand the whole concept. Probability of multiple events was something that really confused me at first since something that was so small created a big probability. After a couple times going over different problems I started to understand the idea. The best part of this project for me was being able to play our game at exhibition. My mom and my partners grandparents really enjoyed our game. Since we really got a good understanding of our game we were able to play our game with no major confusions or problems. Overall I felt like this was a good structured project that I enjoyed.

My group and I chose to measure a snowman. The different parts to the snowman were:

The measurements were based on the average height of a snowman and also the perfect snowman according to scientists.

We all took on different parts of the problem.